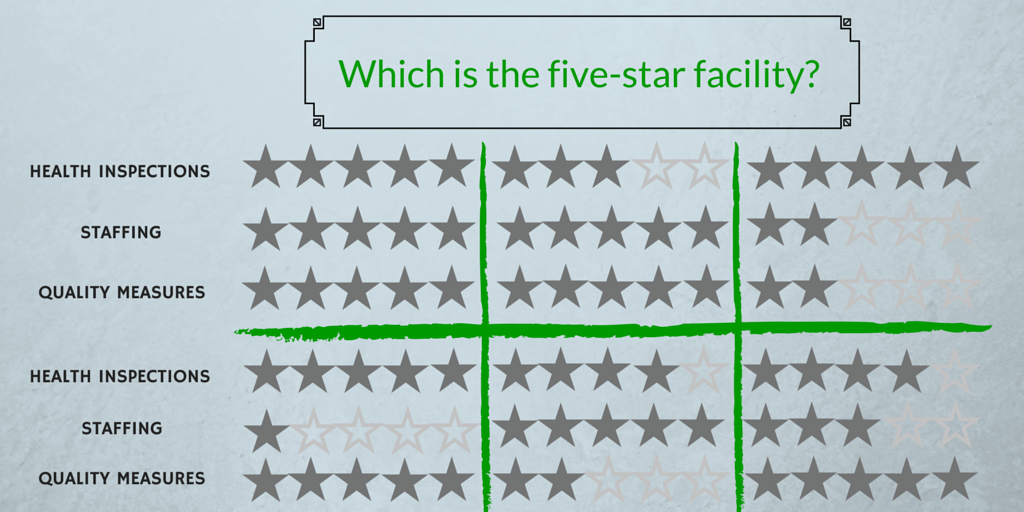 Since the Nursing Home Compare Five Star rating program was first launched in 2008, providers have approached it with a mix of trepidation, envy and awe. Using a set of complex statistical models, CMS awards between one and five stars to every nursing facility, with the goal of helping consumers make more informed and better care decisions. Unfortunately, its reliability is somewhat suspect, as most providers experience fluctuation in their star rating. According to a five-year analysis prepared by Abt Associates, only 3% of providers had the same star rating over the entire period, although 28% ended up with the same rating as when the program started. Almost 40% moved up or down one star over the five year period, while 20% moved two stars. Recently, CMS announced changes to the quality measure content and scoring methodology, costing about 8% of nursing facilities their five-star rating and creating unhappiness in the provider ranks:

To understand what happened, first we need to understand how the score is calculated. You can read the CMS Technical Users Guide, or just follow along:

The health inspection rating is calculated from the number, severity and scope of deficiencies in the past 3 annual surveys, along with deficiencies from the last 36 months of complaint surveys. There is an aging component, as well, so that more recent surveys are weighted more than older ones. CMS then stratifies the star rating so that the lower 20% of nursing homes in each state receive one star, the middle 70% receive between 2 and 4 stars, and only the top 10% receive 5 stars. The actual state-by-state distribution looks like this: 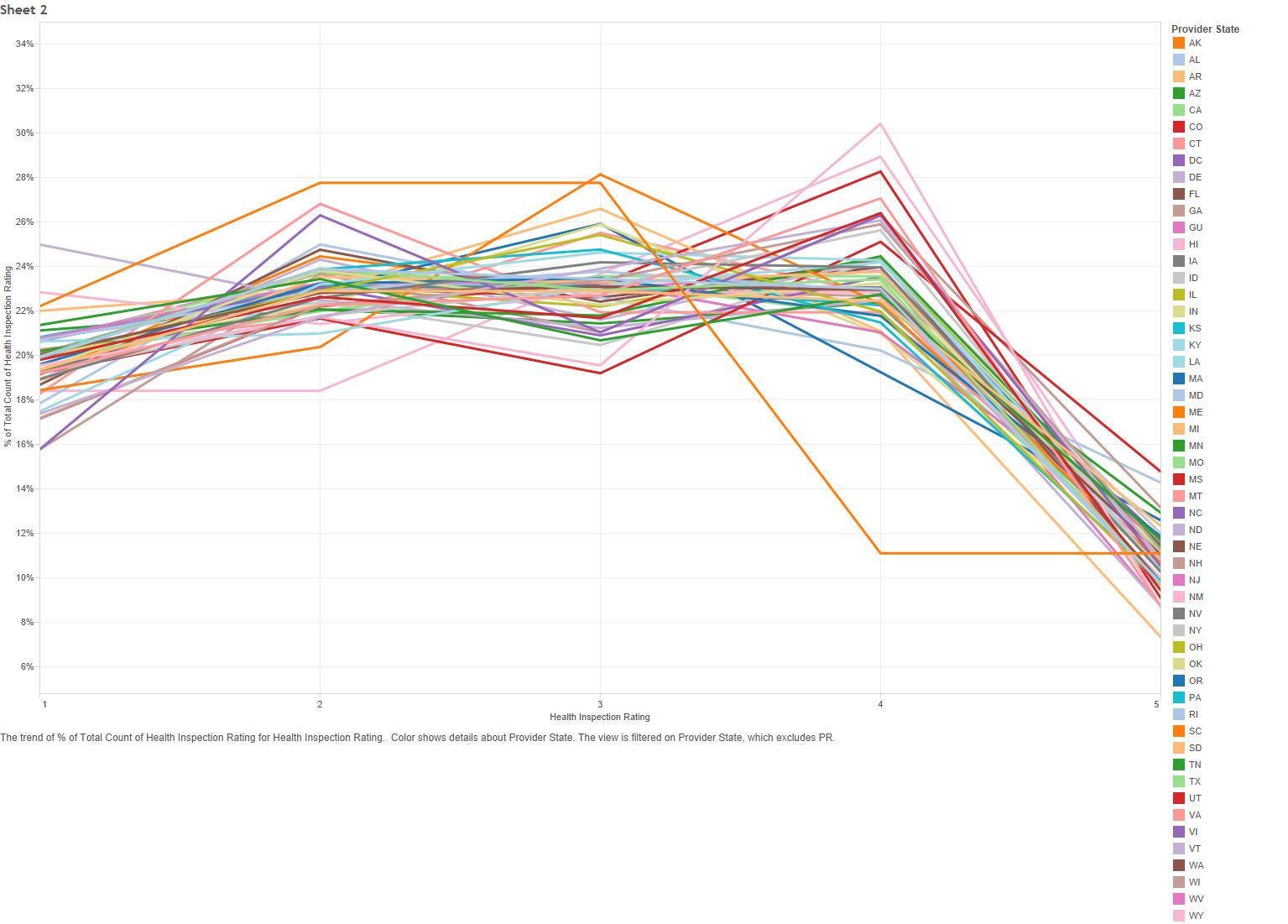 The staffing rating is based on reported staffing during the more recent annual survey, and looks at RN staffing and total nursing personnel (licensed nurses and nurse aides) adjusted by case-mix based on the RUG-III group. The star rating is determined according to the grid below: 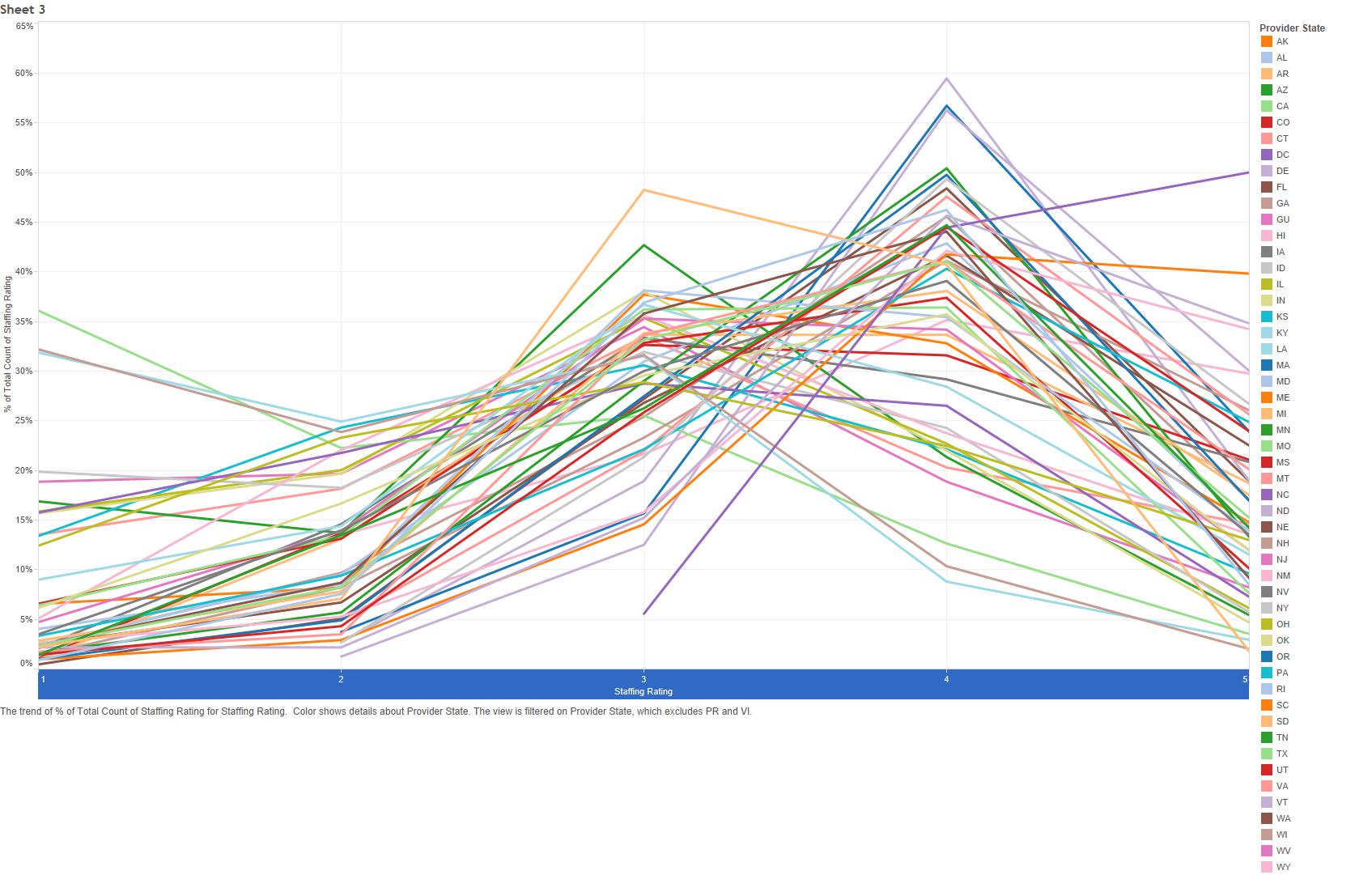 Alaska is excluded from the chart above. Why? Because 100% of Alaskan facilities received five stars for staffing.

The quality measure star rating is based on how the facility performs during the previous 3 quarters (9 months) on 11 of the 18 quality measures currently calculated by CMS:

The scoring methodology is somewhat complex, but essentially point values are assigned for each measure based on the nursing home’s performance compared to other nursing homes in the same state. Each quality measure is given equal weight, so the individual scores are simply summed. The total score is then applied to a scale to determine the star rating.

The current star distribution for quality measures, by state, looks like this: 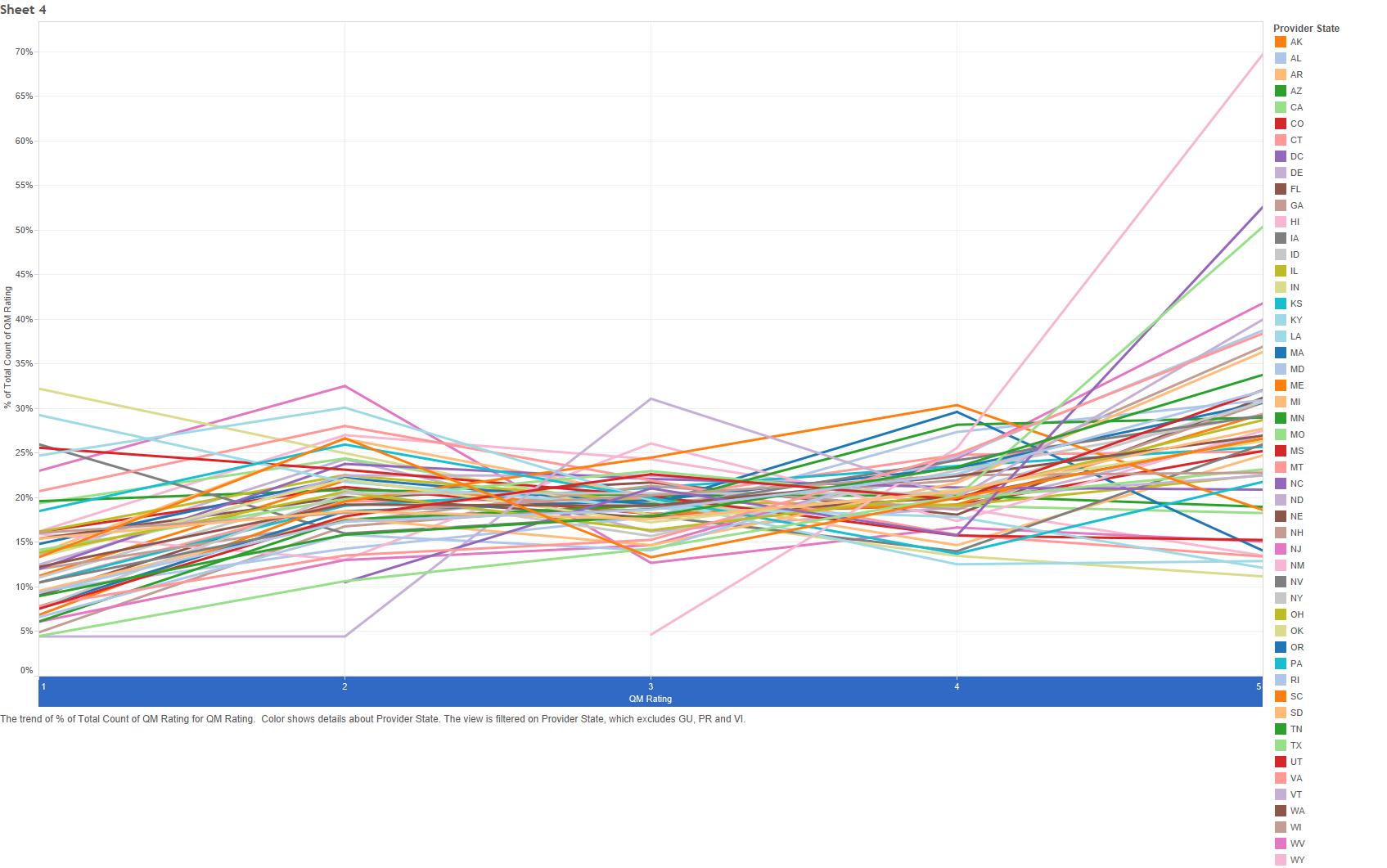 Special note: If a facility has a one star health inspection rating, its maximum overall rating is limited to two stars. Also, if the facility is in the Special Focus Program, its overall star rating cannot be more than three stars.

Why was the Recent Rebasing Done and Why are Providers Unhappy?

Since the fundamental methodology is intended to stratify facilities relatively evenly, but the actual scoring is based on a known point system, a gradual drift towards higher star ratings occurred over the past five years. Part of this is probably due to overall care improvements, and part of this is probably due to providers gaming (or at least selectively improving) parts of the system.

There is also a slight issue of state imbalance. Consider the District of Columbia: 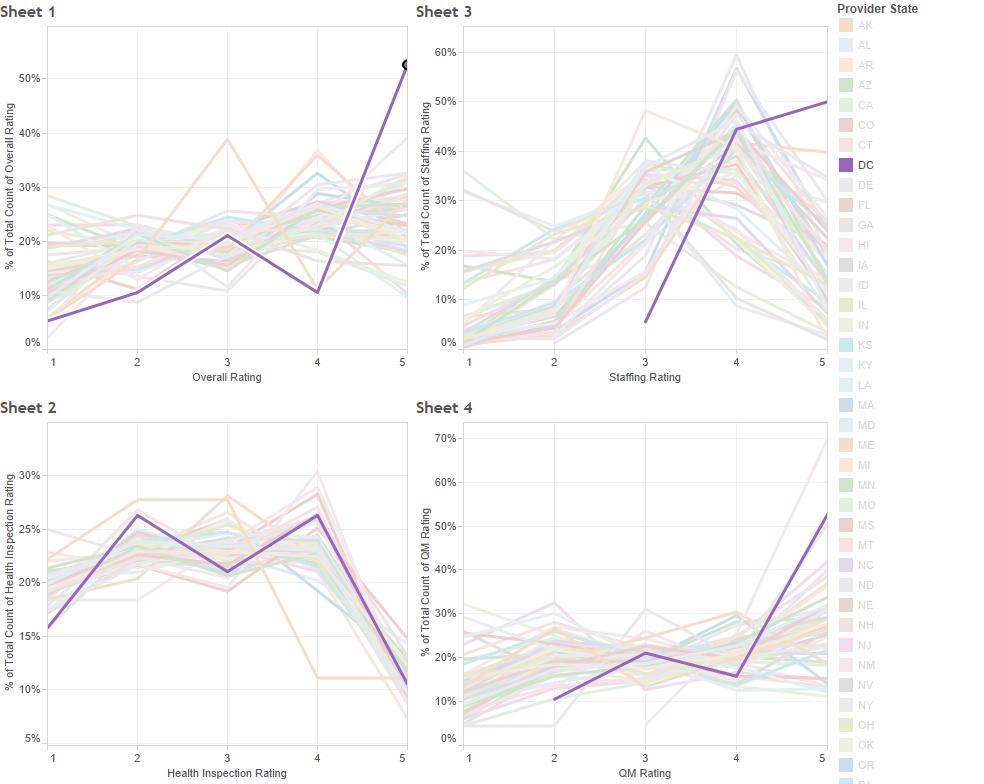 More than 50% of DC facilities hold a five star rating. Does this mean that DC providers provide phenomenal care? Perhaps, though it’s unlikely they provide significantly better care overall than providers in many other states. So how did so many providers get this coveted rating? As you can see above, the majority of DC providers received either four or five stars for staffing and five stars for QMs, which would lead to either one or two stars added to the health inspection rating. This points to a core problem with the five star system: CMS selectively stratifies measures by state, attempting to account for differences in state Medicaid policy and surveyor quirks, but this ends up causing some parts of the measure to reflect best-in-a-state results and others to reflect best-in-the-country results. Since the methodology isn’t standardized, it creates a real problem when comparing the five star rating of facilities located in different states.

What Does This Mean for Providers

CMS has clearly stated that it will continue to update measures and rebase scoring to promote continual improvement in nursing homes. While providers are understandably frustrated, this is simply the reality of healthcare today. Complaining about being ‘kicked in the teeth’ only furthers the perception that the nursing home field is behind the times. Instead, providers should see this as an opportunity to excel, not only in Nursing Home Compare rankings, but in service and care as well.

Understanding the methodology behind the five star rating system, as well as the state-level distribution, is a crucial first step to responding to this recent change. It should be clear that the health inspection score is the biggest driver of the overall score, and to reach a five star rating, a provider must be at or below the state average for survey deficiencies. Thus, it is critical, now more than ever, to build effective systems that embed quality processes into daily work. Customer service is also key, as most complaint surveys begin from unhappy residents or family members. Second, staffing hour cutoffs make it easy to compare current staffing metrics to the star rating system. For some facilities, adding slightly more staffing hours is an easy way to improve the star rating. Third, since quality measures are equally weighted, facilities can determine what measures are close to a higher point cut-off and work to improve those specific measures.

Are you struggling to accomplish your desired strategy? Thwarted by constant operational challenges? Your measurement systems might be able to help more– or they might even be part of the problem.

Many healthcare organizations track enormous amounts of data to guide their action and strategy. Sometimes, however, the pursuit of measures and metrics interfere with the implementation of strategy, and organizations struggle to move past the day-to-day business challenges to accomplish their long-term goals. Balanced scorecards and KPIs are two tool sets that, when used properly, can be used to facilitate both managing operations and preparing for future work. 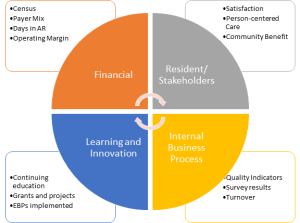 The concept of a balanced scorecard was developed in the mid-90s by Robert Kaplan and David Norton (with help from  Art Schneiderman, et al.) as a response to the over-dependence on financial measures to guide organizational action. The purpose was to translate strategy into measures that could inform action by balancing financial measures with measures around the perspectives of customers, internal business processes and innovation/ learning. Over time, additional features were added, such as strategy maps to help visualize direction, and destination statements to provide more definition around goals.

A key challenge to implementing balanced scorecards is they take a significant investment of senior leadership’s time to develop. While financial measures are easy to translate across organizations (census, payer mix, days in AR and financial ratios would be common in long-term care), as well as some internal business measures (quality indicators, survey and cert. results), the customer and innovation quadrants needs to be more locally refined. Some organizations, for instance, serve specific populations, and the measures of success need to be closely aligned with those missions. Similarly, learning and innovation is important in every organization, but the actualization can vary from an interest in employee development to implementing evidence-based practices to technological adoption.

Sometimes, the challenge is having vague ideas about strategy but no clue about how to get there. I’ve worked for and with several organizations that have wanted to “be the best place to live and work” and “a teaching and learning organization.” They struggled year after year with making progress, however, because they didn’t hone in on specific measures to drive that strategy, nor did they have clear ideas about what exactly those lofty goals meant.

The Capital Care Group in Canada implemented a balanced scorecard, and there are some great lessons learned from research on that process:

“The balanced scorecard has focused on its role as a strategic management tool. The indicators and dimensions need to be customized to the organization. Senior management must be seen to be driving its introduction. It is worth spending sufficient time developing and implementing a scorecard rather than trying to rush its introduction. The scorecard needs to be integrated with existing management processes and sufficient resources must be assigned. However, success will ultimately depend on the culture of the organization being appropriate and receptive.”

KPIs were developed to focus attention on accomplishing organizational strategy by measuring discrete data points. Again, financial measures have been used successfully for quite some time, but KPIs expand the reach to things like productivity, marketing success, turnover, meaningful quality measures (ones that either impact action or reflect operational results) and the like.

When adopting KPIs, it’s important to choose a limited number so that staff don’t become overwhelmed with the measurement of data for its own sake. It’s also important to understand the tendency for measured indicators to pervert performance by allowing managers to manipulate action in promotion of measured activities even at the expense of organizational success. I frequently see this when organizations measure turnover without regard to other performance metrics. This tends to incentivize managers to keep staff regardless of performance or actions– even at the detriment of team morale and operational effectiveness. High turnover is a costly problem in long-term care, for sure, but not all turnover is bad.

Whatever system of measurement you use, it’s important to understand the systems themselves don’t determine strategy. Measurement systems are oftentimes compared to an automobile’s dashboard or an airplane’s cockpit: but remember, you can’t tell where you’re going, or, even moreso, what you’re supposed to do when you get there, by looking at a dashboard; nor can you tell whether you should go through an intersection by staring at your dash. Instead, the dashboard helps keep you on track and can highlight problems that might interfere with your trip. Balanced scorecards and KPIs function in a very similar way: they guide action and help implement strategy– but you still need to know where you are going and what you want to do when you get there, and you must keep in mind that they are only a piece of the overall operational puzzle.

eSSee Consulting has extensive experience developing and implementing measuring and metric systems in long-term care organizations. If you’re unhappy with your current system, or don’t have effective dashboards at all, we would love to help simplify your life by focusing on measures that truly impact performance and push you towards your desired goals.